What is IIoT – the Industrial Internet of Things?

The Internet of Things will allow manufacturers and service companies to track their products’ individual properties during the manufacturing process. Once taken into use by the customer, the product will report back on usage and data leading to possible improvements. Analytics based on advanced statistics will flag warnings to enable preventive or predictive maintenance to minimise faults. Further, by recording general habits of end user behaviour new business ventures or services can be extracted. The collected data will be handled by advanced data handling algorithms and statistics to help identify trends and patterns in those vast data pools collected.

Many billion mobile phones are in active use. Each of us have in our pocket a powerful computing platform capable of much more than the original GSM features of voice calls and texting had anticipated. The mobile network now forms an Internet of People. 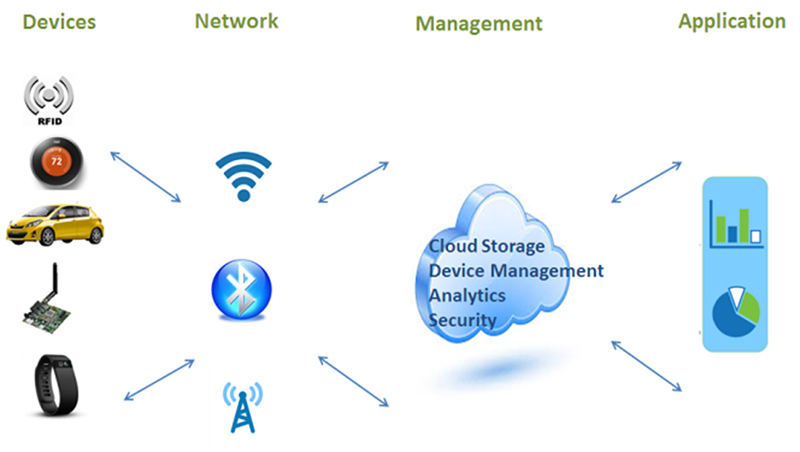 The Internet of Things will offer the next step in connected computing. Adding connectivity to devices – things – exemplified on the left side of above figure will throughout automated functionality in the cloud offer new convenience or insight as shown on the right side. Cisco and Ericsson have predicted more than 25 billion connected devices in use within few years and regardless that these numbers are disputed dependent on whom is being asked, the general direction is very clear.

Simple sensors – whether used to indicate a burned out light bulb or transmitting the air pressure in the tire of a car – will be embedded virtually everywhere as the cost per unit is steadily plunging. The graphs of below figure show that despite the Average Sales Price (curve) has plunged since 2010, the volume increase (red columns) ensures a steady growth in sales (blue columns).

Consequently, larger and more complex units will communicate, monitor or pre-process gathered data. The performance of electronics is steadily doubling approximately every 2 years according to an observation Intel founder Gordon Moore made in 1965. 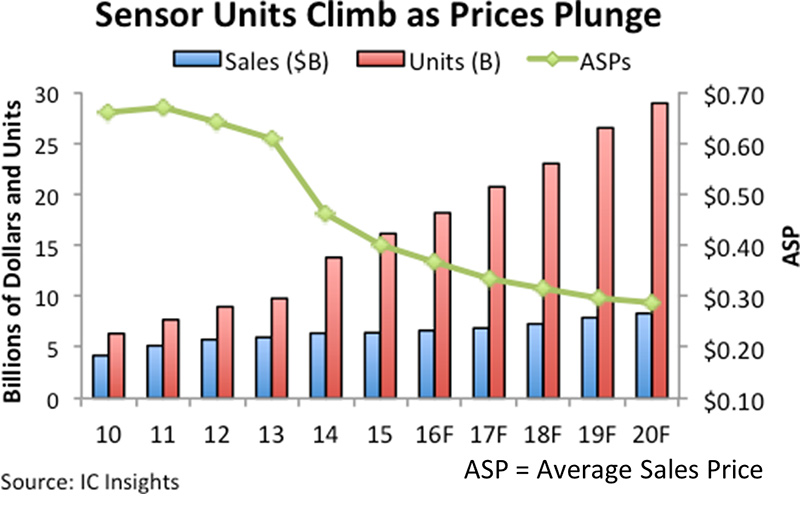 Data collected from thousands of installations will be managed in data centres – the cloud – and used for performing analytics with statistical tools extracting otherwise unknown correlation. The amount of data stored in the cloud currently grows exponentially which demands an ability to visualise graphically any behavioural trend to help producing insight through the complexity of the material. Drag-and-drop-tools assist rapid prototyping and developing new services or simple dashboard applications for customers to monitor e.g. compliance to air quality criteria in commercial buildings – continuously and if needed anonymously benchmarking to thousands of similar installations.

The inevitable consequence to everyone is that new digital market entrants will disrupt and cannibalise the value chain of existing business structures at an unprecedented pace. Throughout this document we will mention examples of business areas already highly impacted: currently leading players are either scrambling to redefine themselves or they will be challenged on their business model and profits from new digitally focused entrants. In the market someone eventually will profit from a ripe business model – and better cannibalising own business than giving it away to others.

“The First Industrial Revolution used steam power to mechanize production. The Second used electric power to create mass production. The Third used electronics and information technology to automate production. Now a Fourth Industrial Revolution is building on advances of the Third. It is characterized by a fusion of technologies that is blurring the lines between the physical, digital, and biological spheres” – Professor Klaus Schwab, World Economic Forum

For every previous industrial step as listed in above figure the access to energy and new machinery generally has changed the pace of development in parallel with optimised manufacturing procedures. Steam powered machines could move or manipulate proportionally more goods than a horse or man powered equipment. With the introduction of electrical machinery, the work division along the assembly line invented by Henry Ford’s outpaced the existing full work cycle of a traditional craftsman, thus enabling mass production.

The third revolution as mentioned above introduced electronic computations and gradual automation of repetitive work processes. Yet within the time span of each of the first three revolutions the efficiency was linearly improved – assembling 500 units still took 10 times more resources (time, material, power, factory floor space, distribution) as producing 50 units.

The fourth revolution introduces exponential rather than proportional growth ratio: when any new digital service can be accessed from e.g. Amazon’s seemingly indefinite server capacity its propagation to the market is a matter of how contagious the business proposition is, not physical constraints. There is no direct cost associated to distributing millions of copies of software to a smartphone – the link is totally separated from physical limitations such as calculating the amount of equipment and staff to assemble a device. Due to spare capacity the contract electronics manufacturer Flex (former Flextronics) offers similar scaling on hardware goods based on modular components delivered in 10 or 10.000 or 10.000.000 samples. 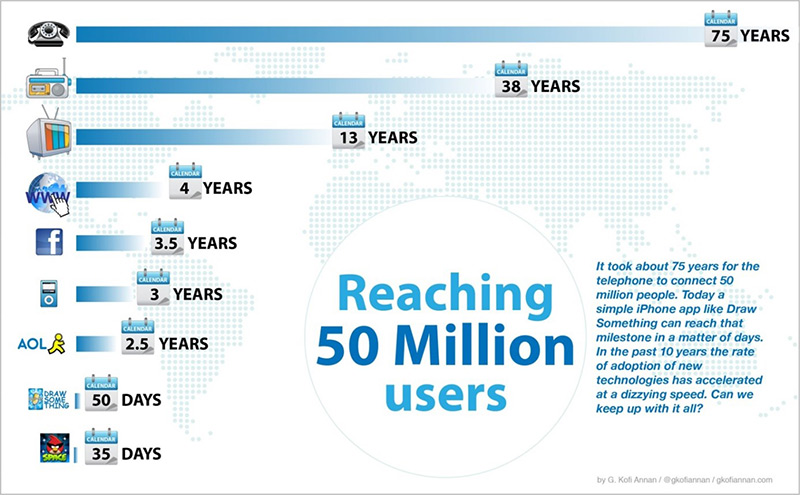 Figure: The speed of reaching the first 50 million customers

The contagious nature of friction-less exponential growth nurtures the “winner takes all” tendency as illustrated in above figure, yet the leading position may fade quickly unless supported by substantial and enduring advantages for the end user. Does anyone still play “Draw Something”?

Representatives from the German industry and politicians have agreed to a joint charter generally applied across multiple domains, listing initiatives for the federal government to cater for the next revolution. INDUSTRIE 4.0 on the manufacturing floor signifies a paradigm shift away from centralised to more decentral and smart manufacturing and logistics – collecting and adjusting production according to real time measurements. Once installed the products will be monitored and supervised to predict errors and optimise service attendance.

As an illustrative example SKF, the Swedish roller bearing manufacturer, has increased net turnover 50% by adding a digital services business of monitoring and maintenance to their original core product of small steel balls. By measuring vibrations on machinery running on SKF bearings they can validate correct mounting and subsequently analyse a known vibration pattern from the installed bearings, then overlaid vibration of the healthy machinery connected. An advanced analytics algorithm recognises the contribution of individual components from the accumulated acoustic spectrum allowing SKF to identify sources of unknown or malicious vibration patterns thus guarding the installation life cycle.

“SKF has developed advanced services and technologies to maintain, monitor, repair and optimise your assets throughout their operating life. SKF is providing the optimum replacement parts at the right time and helping customers to optimize asset efficiency.”, text from SKF website.

Let us know when you would like a demo

Let us know when you would like a demo